The stories from Warm Vltava river

It has been nine years since I wrote my last fishing memoir from the Warm Vltava River. There must have been more reasons and mainly it was due to the fact that the man gets older, loses some of this abilities and this happened to me as well. After my heart surgery I stopped being successful at the water, my fishing enthusiasm began to fade away so much that the number of my attendances to the fisheries could be counted on fingers of one hand. I was always waiting for the most suitable day, when there is not so much sunshine, wind, rain and the right water flow and therefore there was always a reason why to postpone the trip to the water. This was also caused by the fact that I found several other activities among which was my business with flies and fly tying equipment and issuing various books which would never be published without me …

October Chronicle from the Grayling Paradise (2008) 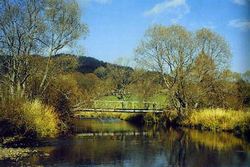 October near the Warm Vltava - it is a period which I always look forward to the entire year and also this year it was the same. At the end of September I had a call from Martin who was saying to me that water was covered with carpets of upwings like in the old times and it is not easy to persuade any grayling, even if there is the entire shoal of them rising. After this positive news I started considering the visit of my favourite places, where I was at the end of July last time and at that time I greatly enjoyed big grayling fishing with a dry fly downstream of Dobrá.

In Praise of Quils 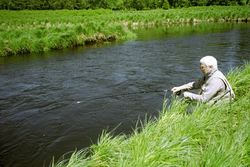 I opened this year’s fly-fishing season on the Warm Vltava River on June 6 when I went there for a trip with participants of  the 2010 Czech Nymphing Masterclass. We had beautiful Spring weather and clear skies with only a small cloud from time to time. The water level was elevated prospects for very good fishing. Rob and I went to my beat located a short distance from Dobrá village; However, although we caught several fish, the catch was by no means as good the previous year.

After about an hour trying various methods we decided to climb the right side of the river and to move to another goodsection of river that flows through Schulze’s meadow. The bank is relatively high and descends steeply into the water. I cast nymphs from time to time as I moved along the bank, but I could not catch anything. So, I reverted to my tried and tested Summer rig with a small goldhead black nymph on the point and a small beige Czech nymph on the dropper. Suddenly it seemed to me that a small circle had appeared on the water surface at a very good place, only a short way from the river bank. I could not swear on it but I stopped and observed the water attentively. I sat down on the bank and thought whether I should change to dry fly. But it was still long before noon, and so it seemed too soon to me. The biggest grayling stay in those places and I did not want to alarm my possible catch. I waited for another rising, but nothing happened.

Weiterlesen: In Praise of Quils 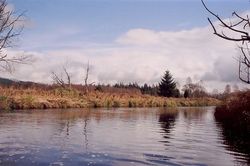 Autumn on the Warm Vltava is typically quite cold and unpleasant, but for some reason the weather this year (2009) was much more comfortable and warmer than normal. In the meadows, downstream of Dobrá, unusually large numbers of fly fishermen have recently been sighted on the river. I couldn’t say for certain, but I had a strong hunch that the over-crowding was due to my recent articles on the Warm Vltava. Unfortunately the crowding seemed to be having a negative impact on the angling success and tranquility that is normally experienced while fishing on the Warm Vltava. In order to escape from the crowds, I bypassed the more popular pools and stretches of the river, and sought refuge in the less pressured water, further down a path less traveled. My expectations aren’t usually very high at this time of year, as the cold and stormy, autumn weather can significantly reduce a fly fisher’s chance of catching the larger grayling and numbers of fish.

I had an appointment with Václav Liska before lunch at Stögrova Huť, on Saturday October 3th 2009. Despite the fact that we have known each other for several years, and he had published my first book (Stillwater Fishing Basic), this was the first time that we arranged to go fishing together. Václav brought the last proof-reading of the latest Czech-English book on flies (Secret Flies of the Czech and Slovak Fly-Tiers) with which I helped him to prepare for today’s adventures. It was a sunny and very windy day, and the water in the Vltava was very low. We parked our cars near the Soumarský Bridge and walked upstream. Václav chose to start out with a nymph on a French leader, while I would be fishing with a dry fly. 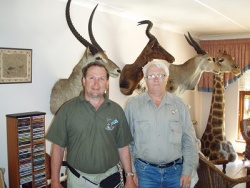 On Monday, April 23, we stopped in Johannesburg for a while. First, Korrie visited his mother in hospital and we waited for him in a small fast-food place where we had coffee, some mineral water and a couple of sweet cookies. Although about five black attendants were employed there, our simple order took more than a quarter of hour, because nobody really hurries here.

Korrie met his second sister and she invited us to her nearby house. Even this one-storey building was perfectly secured against intrusion. In one of the rooms there was a great collection of African fauna, stuffed here in all their beauty or with trophies hung on the wall. Only an elephant, lion, rhino and hippo were missing. This sister’s second husband was a naturalist but was unfortunately already dead. That seemed strange to me, but I learned that men in South Africa don’t live as long as those in Europe. I felt a sudden surge of homesickness. 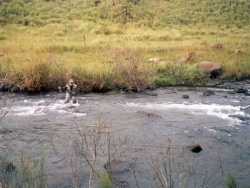 Weiterlesen: With nymphs to South Africa - part I

One hot september on the Warm Vltava

During the first week of September I received a phone call from my dear friend Martin. He told me of the fantastic fishing that he had recently experienced downstream of Dobrá village. According to Martin the skies had been overcast and water levels were high, but apparently the grayling were jumping clear out of the water to take mayfly duns. Our telephone conversation had really sparked my interest, so the very next Sunday (September 6, 2009) I set out on a fishing adventure to explore the Upper Vltava River, within the Bohemian Forest, in an area that the Czech people commonly refer to as “The Sumava Mountains”.

Weiterlesen: One hot september on the Warm Vltava 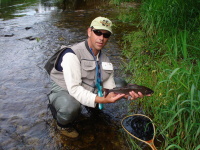 During the middle of June 2009, Jiří Klíma organized an international Czech nymphing course that was held in Rožmberk nad Vltavou. During the same week, I organized trips to the Warm Vltava. The ten “students” that participated in this year’s Czech Nymphing Masterclass came from Belgium, Netherlands, England, Germany, Finland, Canada and Australia. It was a pleasant mix of fly fishers that ranged from 22 to 62 years of age. Their fly fishing knowledge and skills varied greatly, which made it challenging to find the right stretch of river for each member of our group and areas where they would be able to catch good numbers of fish.