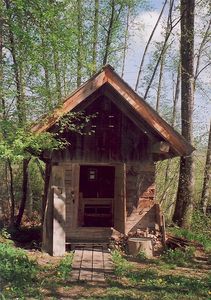 Another fabled fish is in German called Perlfisch (in the following lines we will call it with its German name). Many years ago, some fishermen were looking for a fly for this fish at an exhibition and I was not able to answer them and I even did not understand what they were asking for. During the time I found that this could be a member of the roach (Rutilus) family, which lives in lakes and grows to a significant size. I have concluded this issue for myself that this might be Danube roach (Rutilus pigus) and its huge size I regarded as fishermen’s tales.

Then I heard about this fish from Franz, who was planning our common trip for this huge fish at the time of its spawning in the river. Last three winters Franz was repeatedly talking about our mutual trip which never happened. This lasted by the end of this April before he called me that he is ready with the proofreading of the German version of my book ”Basics of still water fly fishing” and invited me to the finalization of his job and simultaneously for fishing of our mystical roach. “Perlfisch is just in the river for spawning and in a few days it will return to the lake again!” 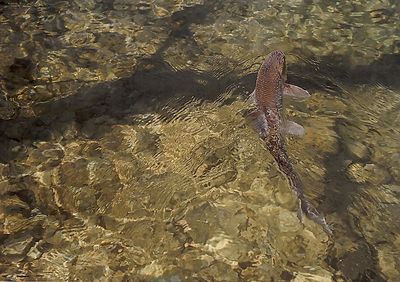 On Tuesday, 27 April 2013, I set out to Salzburg and after the necessary welcome ceremonial we sat down over the final changes in the manuscript of my book. We were working until 1 p.m., went for lunch and went to see about 15 km distant lake which Franz has leased with nine of his friends. They have here such a cottage together and a small boathouse. However, it is necessary to say that this is not a trout lake, but a non-salmonid water (about 15 hectares) with occurrence of predatory fish (pike-perch, perch, pike, cat fish) and with mixed stock of carp fish species. After visiting his pride we continued by 7p.m. with works on the proofreading of my book and we still had about 70 pages left.

Then, my friend sat down to his vice and started fly tying for the next day that was fully booked only for our mystical fish. He tied huge nymphs on the hook size 6 on which he himself poured huge tin heads of the diameter 6 and 8 mm and painted eyes on them. Then he tied a tail, wound black chenille on the shank, made palmer grizzly legs and all he secured with silver fly tying wire. He calls his pattern Black Terrorist, unlike the similar Green Terrorist, whose body is green and he likes using this fly for grayling fishing in large rivers. Of course, I believe in our nymphs, but for sure I carefully saved the three donated terrorists.

While Franz was tying, I was looking into an Austrian book with fish, where the Perlfisch got a space on two pages. To my surprise I found that this is a different type of roach whose scientific name is Rutilus meidingeri (Heckel 1851). This fish lives in Attersee, Mondsee, Wolfgangsee and Traunsee (?) lakes and probably in the Danube River. On average it grows up around 45 – 55 cm and up to 75 cm at the most. It feeds on insect larvae, molluscs, crustaceans and other species of invertebrates and with its pharyngeal teeth it is able to crush even very strong shells of various mussels. In early summer, this fish likes eating Mayfly larvae and often their dead spinners. In winter you can find them in lakes in depths of around 30 m. After this preparation, we tasted white wines from Franz's supplies for a while and then we went to sleep.

In the morning our first steps led to the leaseholder of the river upstream from the Wolfgangsee Lake and with Charlie we set out to his river which was about an hour away. Firstly, we stopped at his old cabin, whose age the owner estimated to about 300 years. The small timbered house looked a bit like a wooden cabin from the area of the central River Váh (Slovakia). Before fishing we had to have a good meal and then slowly and prudently we started getting dressed and prepared of rods. It was something completely different than fishing with younger fishermen. It was not definitely getting dressed during chase to the river and building the rod on the way.

Franz and Charlie began to chase a pike which they wanted to remove from the fishery for longer time and I observed a pool near the cabin. The bottom was covered with flat stones and in crystal clear water large shoals of big fish were swimming and it was foolish to think about fishing them. I decided to walk upstream and find a better place to fish. The path ended and I had to wade in about twenty meters wide river to be able to keep walking along the opposite bank. However, the clean water rather surprised me, because at first sight it looked the water was deep up to knees, but in reality the water was deep a bit over the waist.

I walked about a kilometre upstream and finally saw a hole with swimming fish. The fish did not spawn yet, but only curiously moved in a pool and it seemed to me that sometimes the fish came to see me. From autumn I had a 6-meter long Janus’s French leader with a spiral indicator on my reel and with respect to the fish size I took an action five 9-feet rod Sage RPL+. The river was only a bit more than 10 meters wide and I waded not far from the bank and casted my biggest jig to the selected fish and repeated my attempts several times without success. My bait was probably small for such huge fish and so after several attempts I took the Black Terrorist. I have to admit that I had never fished with such a large nymph, but it was tested here and therefore it should work. In Austria you can fish with one fly only and the size 6 on the tippet of 0.18 mm was probably the best choice for these conditions.

I casted my new nymph in front of one fish and let it roll on the bottom and then I lifted it. When I was doing it for the second or third time, suddenly my rod got heavy and more than a half-meter long Perlfisch started going up and down the pool. The fish was clearly hooked in the head-area and after about three minutes of careful playing, the fish got angry and started swimming quickly upstream. |I was releasing the line for a while, but then the fish fell off my hook.

It proved that Franz’s Black Terrorist worked well so I kept fishing with it. I have hooked the fish from the bottom and it fell off the hook soon and so I started lifting the nymph and during one such a lift I saw a smaller fish how it turned around, opened its mouth in the medium deep water and took my nymph. I stroke and played with the fish for a while and lost it again. My strike might not have been strong enough and the hook tip did not penetrate deep enough into the hard and fleshy fish mouth.

Suddenly, Franz came when he finally managed to get that pike and told me to go fishing a bit more upstream. I took his advice and stopped in a pool about 100 meters under the outflow from Wolfgangsee Lake. For about the third cast I stroke another fish and this time I applied the tactics of the strong fight with the fish. My rod was bent in a circle and this fish fought like a lion. I was playing with it for about five minutes before I managed to release the hook which was hooked under the mouth. The fish had spawning rash on head and sides and tail and this rash looked like small pearls and from each pearl there was a sharp and dangerous thorn. I got the advice before and therefore I did not touch the fish and carefully released it from the hook. Even after previous tough fight the fish did not resign and quickly disappeared in the stream. It is about half-meter long body looked like the body of a chub or barbel, it was no flat fish, the fish back was olive-brown and the sides were silver.

Then I caught two bigger perches and lost the Terrorist with a red tail and so I had to take another Franz’s nymph, but this had a 6 mm head. However, this was as efficient as the one before and in a while I caught another similar fish with a hook deep in the mouth. Finally I got to about 50 meters under the lake, where the biggest fish were spawning. About ten individuals were swimming in a bigger distance from one another and devoted themselves to love games. After several casts I succeeded again and stroke a beautiful fish with which I walked down about fifty meters downstream before I released it from the hook that was hooked in its massive nose. I held it next to the rod to mark its length - it was nice sixty centimetres. Simultaneously, behind me was Franz playing with his fish and that might have been even by 10 more centimeters longer. This was enough for today and we walked up the bridge under the lake and observed relaxing fish whose length must have been up to 80 cm. 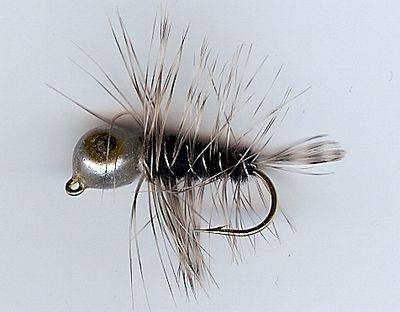 I did not want to fish any longer so we walked a bit downstream and in one pool we found about two hundred head shoal of barbel who were one next to another, like soldiers at the parade, and they were hoovering the bottom in the place where Perlfisch was spawning about an hour ago. Franz caught several such barbels with his Terrorist and then we went for the second lunch. There I met Rudi who was also invited for today’s fishing. Charlie told me that so perfectly low water he had never experienced in this season and then he liked looking at my flies. After the lunch we went fishing to the section downstream of the cabin and there it was about fishing the salmonid species and Charlie liked my fishing style with a short nymph and a French leader. Then Franz made fillets of the pike and the second day we had it in cream with lemon sauce. We managed to correct the manuscript by lunch time and we were both happy that those three days were so nice.

In fact, this was my year’s start of the season and my first contact with this mystical fish. I had to agree with my Austrian friends that this Perlfisch fights like a small salmon. Now, there is a question regarding the Czech name of this rare fish. I do not even know if such a name exists, but if this fish has not been named yet, I would prefer calling it as a plotice perleťová (pearl roach)...