As the name itself says, this is the third edition of the popular book about the Czech nymph. Compared to the previous editions the text was extended by 8 pages, when some news from the period of one year, that has gone since its first edition, have been included. This book will prove invaluable in creating a greater understanding of the technique of short-nymphing under the rod tip. As such it has atracted a great interest since it reveals all secrets of this original fishing method. 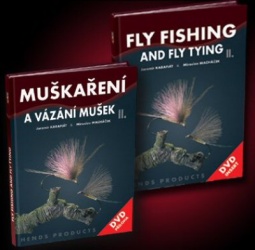 This is the second edition of the book that was published in 2002 in Czech version and now it was issued again in Czech, English and Russian version. The book was extended by some news about nymphing, especially about the French nymphing. It also deals more about the Czech nymph, large part is devoted to the dry fly and streamer. In the book we can find many detailed methods of tying various kinds of flies and the last 20 pages create the catalogue of products of the company Hends. This is a modern fly fishing handbook, complemented with a unique 50 min long DVD focused on nymphing and streamer fishing as well as tying efficient fly patterns from this segment of fly fishing.