Silver from Poland and it was really worth of it! 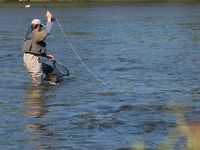 The first trainings of my altogether fourth world championship were really hard for all, and we practically had nothing to follow, as the river was too high. In the first days we went practice only under the equalizing reservoir Myczkowce, where there were many other teams, or on the tributaries such as Solinka, Hoczewka and Oslawa, which was not really good and especially it was clear, based on news from Polish people that official trainings and competitions will be with low water. The practice in the lower San, upstream from the tributary of a little river Oslawa, where I did not catch any fish on the first practice day, but the guys did was really important for me, and thus I decided to repeat it the next day. Then, I caught there 3 big graylings and one them had fallen off that was great as almost nobody around caught anything.

Regarding the lake, there we were quite bad after the first training as our total score was two browns with two boats. The second practice was about something else. I was in the boat with Pavel Chyba and we caught quite many brownies from 20 cm to 30 cm. We were both fishing with a sinking line DI 3, and I had a completely new product from the company Airflo DI 3 Sweep, which has proved to be our the most important line.

The first competition day I was in the boat Christiaan Pretorius from South Africa and I was immediately sure that he knows how to fish from the boat! The first half I was the captain and immediately after the start we were going to the places, where there was the border of the practice and competition sector and where I was successful in the training. We got to the place and after three unsuccessful drifts I turned back and saw that many boats remained not far from the port. We also went that direction and when we drifted for the first time about 20 meters from the bank and Chris got the first fish. After the next three drifts he was leading 3 : 0, and I had various memories in my head and was thinking about my unsuccessful championship in Scotland. My troubles took one hour and fifteen minutes until I got the first fish and I was also testing the line DI 5, but without any success.

I got back to my tactics and used DI 3 Sweep and changed the dropper fly from the Black Lure with a silver bead to the same lure, but without bead. The strike came immediately after the first cast and on the “hang“, when the flies stopped at the boat and consequently were lifted to the surface. In a while, a 26cm-long trout was mine and all troubles were away. The second half of the competition was going on and the South African was the captain. We drove to the opposite bank of the lake and immediately with the first cast my partner had a fish again. But I was not far behind and I was getting close. Finally, our score was 5 : 4 for him and thus we were even the winning boat! The South African caught 5 fish and he became the sector winner and I was the second with 4 catches.

After a short lunch I had the second competition in the San river in the small town of Lesko. I knew that I would have to rely on myself as the guys texted me that they were still solving the problems with punctured tyres of our car. Nevertheless, after a proper inspection of my beat I decided to stay in the lower part of the beat and start with a dry fly. After not all five minutes I had a nice brown trout and by the end of the competition I caught 9 more fish with a dry fly and this meant nice 6th place in the sector. But I was not really satisfied as I lost eight more fish. This was apparently caused by the fact that fish in this place were very careful and they were taking flies very carefully.

After the first competition day I had second place from the lake and sixth from the river, but I was more interested in the team results and this was good as the team was close to medals. In the evening I tied missing flies and prepared all for the San again, however, this time to the lower section downstream of the town of Lesko. Where we go and especially after whom I am going to fish we learned every day in the morning on the bus, thus I did not know until the last moment, who was fishing there before me and how many fish they caught. When I got off the bus, immediately an older me came to me and told me that he was my judge. All fifteen-minute long way to the beat we were speaking in combined Polish and Czech about everything possible, and thus I learned that there was a Polish and then Italian guy before me. So, there was no good prospect for many unhooked fish. The judge was really great. When I opened the fly box he immediately told me what the Italian was fishing with. I did not trust him very much and I wanted to keep the tested flies, but finally I put on the dropper of the nymphing rod PTN with orange collar and golden tungsten beat 2.8 mm as the judge advised me. I started with dry flies again and on the second cast I caught a grayling and the second one fell off the line. Final result was 3 fish with a dry fly and 4 with a nymph. Altogether I caught 7 fish and it was the 7th place in the sector. The aforementioned PTN gave me two more graylings.

The afternoon was free, but I did not relax much as I had to prepare both for the lake and the river. Furthermore, I had to be in the morning on the San – in the Catch & Release section, where really very few fish were caught and I had my flies tied on thin Skalka hooks, with which I am used to fishing in our country and I do not lose even careful fish. With respect to the size of the local fish I knew that I had to be careful when they are on the rod.

In the morning our captain Tomáš Starýchfojtů traveled with me. On the bus we found that on this place fished a Polish guy before me, who won the sector with 11 fish, but then there was a Finnish guy who caught only one fish and then a French guy who caught only one fish too. Water started being cloudy after the evening torrential rain and thus places which looked toward in clean water were slowly disappearing.

I started with a dry fly and after a few casts I caught only 2 small trouts and changed my rod for the nymphing one that I was carrying fixed behind the belt not to come back to the bank again. I started fishing in a small stream about in the middle of the river. After about five minutes I had a grayling and I knew that this will be good. Furthermore, after measuring and release of the fish from the same place I added a nice grayling. The result of my three-hour fishing was 4 fish, Jacquemin from France had only 2, Konieczny from Poland only one,  Hribik from Slovakia and Pretorius from SA were blank. This meant that in my venue I had beaten competitors from the teams which were ahead of us and this was the most important. Finally, I was the 6th in this sector.

After lunch I had to go to the upper section on the lake and from my friends I learned which flies work there and it was important to find the fish. In the boat I was with a Fin Jaakkola and by coincidence I was with him in the boat in New Zealand 2 years ago. I was the captain in the first half and started again with the DI – 3 Sweep. As the end fly I used Black Leach with a silver bead and green flesh collar. On the dropper I had the same, but smaller and with a fluorescent green bead. We had to make the leader tippet thinner and thus I used FC of a diameter of 0.16 mm. After two unsuccessful drifts along the bank I moved quickly to the centre upstream of the river bed and the Fin immediately caught a fish. I had immediately the second and after this I was fishing freely knowing that I cannot be blank and guys will manage it too. Finally, I caught 8 fish and he had 5. This meant 4th place in the sector for me. Furthermore, Konieczny from Poland caught only one fish and this was the same as he was blank. The French won the sector, however, he was only 3 placings ahead. When we got to the bank, Roman Jörka was waiting there for me and he knew that he won against both his French and Slovak competitors. Now we only had to wait.

When the other guys were coming to our room and all had the fish and Pavel was the first, I believed that we will have a medal. Now, it was only a question what the medal will be. We were having dinner, sitting around the table and Jiri Pejchar ran to us and told us that we had won and Pavel is the first and I am the second. We jumped on each other and a bit shouted in the hotel dining room. And it was more than clear that we will not go to sleep early that day. Immediately I went to call my dad home. My dad was fishing in Slovakia and in the morning he packed his things and came to see the ceremony in Krosno. When you are standing there with a medal on the neck, the Czech flag is rising, Czech anthem is played, your friends are standing besides and your dad is there opposite of you, this is the most beautiful feeling you can experience in competitive fly fishing.

What I was fishing with: