European Championship 2011 or the Czechs at home cannot be beat

From 31 May to 5 June 2011, the 17th European Championship in fly fishing was held in the area around Rožmberk nad Vltavou, attended by 17 teams, two of them Czech (men, ladies). The actual championship was preceded by the preparation of the championship teams that started to arrive from 21 May. According to the presumptions on paper, it was clear beforehand that this would be a duel for the gold medal between the home Czech team and France, leaving the others to battle for the bronze, especially in situations in which difficult venues were chosen for the competition, but with plenty of fish. According to tradition, both the Czechs and the French sent their B-teams to the European Championship. This was all supposed to play into the hands of the home favourites, who were supervised by a group of five international judges from Poland and Holland.

This year's championship took place according to Czech customs, meaning that for the first time in history, the rule applied that all species of fish would be evaluated. Another feature was the inclusion of competitor rotation in venue No. I in “Devil's Rapids” and morning and evening fishing on Vltava 28, done to eliminate the pressure from river boaters. We may say that all these innovations proved successful, as expected, since the rotation of competitors has been commonplace in the Czech Republic for many years because it contributes to more regular conditions, helping to eliminate the adverse draw of competitors.

The championship itself was launched in the Monastery Garden in Vyšší Brod on Tuesday May 31st. The International Fly Fishing Federation was represented by its General Secretary, Mr. Borut Jerše from Slovenia, who was the only official of the FIPS-Mou who dared to come to the Czech Republic. His appearance here proved successful, as it did in the Youth World Championships in Chotěboř two years ago. The other members of the presidium offered their apologies; we hope that it was truly for serious business reasons and not a result of the Czech revolts at the April meeting of this international organization in Rome.

After two days of official training, the competition began on Friday

June 3rd. Breakfast was at five o'clock, then the competitors went to the large Vltava River to sector III below Vyšší Brod and to sector IV above Rožmberk. The competition here was held in the unusual period of 7 to 10 a.m. As already noted, this was due to the significant pressure on the river from boaters, and it was also the reason why the rotation of sites was not implemented here, since this would have meant a further extension of the competition.

Vltava 28, however, is so well stocked with fish in these venues that it wasn't so necessary.

In addition to brown and rainbow trout here, there were also chaar-Dolly Warden, grayling, dace, chub, bram, perch, and pike.

Another competition venue, No. I, was marked in the “Devil’s Rapids”, which is a small river filled with huge granite boulders and treacherous pools with a slope of around 10 percent. This area features a nearly pure population of trout, while other species occur here only seldom. The growth of the Brownies was less, though, which was why the eligible size was determined at 18 cm for the entire championship. To make it more attractive for the competitors from the British Isles, the Lipno II equalizer reservoir above Vyšší Brod was chosen for venue No. II, to which 1400 kg of rainbow trout had been released, and the fishing was done from small boats. The venue No V. was then supplemented by the Květoňov Lake near Kaplice for bank fishing, having been well stocked with rainbow trout. A total of four venues, then, had been stocked with rainbow trout from 0.5 to 3 kg, which certainly pleased all the competitors. 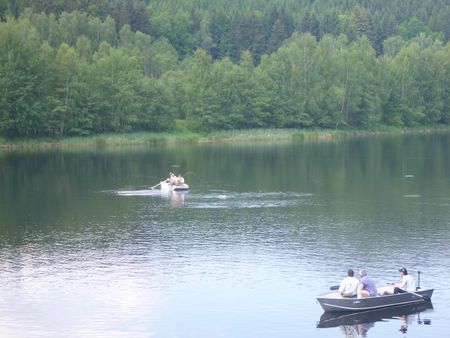 Saturday morning came without a cloud in the sky, but yesterday's rain had made Květoňov reservoir very cloudy. The third period was decisive for the rest of the competition, in which the Czechs overwhelmed their rivals with a total of 12 placing, and they only needed to catch 99 fish. The Poles had a placing sum of 37 and fell to third place, while the French returned back to their second position with a sum placing for this period of 27. The Spaniards and Slovaks held the next two places, and from now on the teams would battle only for the silver and bronze medals, since the Czechs held a lead of 31 places. There was no way to lose it now, even though it had happened once before at the World Championship in Slovakia in the history, but that's a slightly different tune...

In the individuals, the Slovakian Němčík took the lead, having won his venue above Rožmberk with 21 pieces, Filip Apjár (CZ) won on the Vltava in Vyšší Brod with 30 pieces and was still at second place, the Spaniard Aitor Gonzales took 34 pieces at the Devil’s Rapids, Frenchman Jean Guillame Mathieu was first on the lake from the boat with 14 pieces, and Marek Walczyk (POL) took 6 pieces at Květoňov. The Czech representative Ivan Vančura continued to hold third place after three periods.

The Sunday morning of June 5th was the last period of the European Championships with two medals in the team competition and all three medals in the individual competition still up for grabs. Ivan Vančura's (CZ) only chance for the gold was to win in venue I in the Devil's Rapids; he had all the preconditions for winning, since he had drawn the last two beats for Vltava 29 above the Lipno II reservoir, which tended to be a winning combination. All the same, this would require Frenchman Jean G. Mathieu to not come in at better than fifth at Květoňov; this combination actually came to pass when the young Frenchman came in one centimeter short at fourth place in the venue, thus missing his shot at the European Championship title. Even though the Czech competitor finally won his venue in the last period as the only one of the favourites with 30 catches, he was lucky that Marek Walczyk (POL) had finished at third in his venue. The Slovakian Němčík had bad luck, though, having lost a number of fish on the lake at the boat, thus losing the potato medal.

In the team competition, the French won the fifth period with the best sum placement of 11 and 99 fish. Spain came afterwards (17/72 pcs), third were Czechs (21/85 pcs), fourth Poles (38/50 fish) and fifth Italians (40/46 pcs.) The Czechs were the clear winners overall, being the only ones who had a double-digit result in the sum placement (96) and had caught the most fish (502). All five of the Czech competitors made it to ninth place on the overall individuals list, which was a hitherto unheard-of result. The French team proved to be worthy opponents, placing 122; a difference of 26 was probably larger than had been expected before the competition. As the French manager said to me after the competition: "At home, the Czechs simply cannot be beat."

The Spanish team surprised everyone by taking third place with a sum placing of 137 for 421 catches, their main weapon being the dry fly. This also clearly shows that any sort of attempt to limit or restrict the style of catching is pointless, since all methods have a chance at well-selected and well-stocked venues, and only a complete fisherman can win, provided that he's got a bit of luck on his side. The Poles were disappointed at fourth place, surely expecting more, but their old aches came back again, since winning such a competition without a good dry fly is simply not possible. The Slovakians ended up resisting the onslaught of the Italians, holding fifth place by a single placing and three fish. It was their best result in similar championships in the Czech Republic and at the European Championships (away from their domestic waters). The European Championship 2013 is scheduled to take place below the Tatra Mountains, so we will see how far the Slovaks get on their homeland waters under the watchful eye of international supervisors.

As an organizer, I had little time to follow the competitors, but I didn’t miss the French at both Vltava 28 and Devil’s Rapid. They surprised me in the small river with a quite new tactic. They nymphed upstream with a single light nymph which they changed as needed for a dry fly. I watched Juglaret during his victory in the fourth period. His Camoufil leader wasn't even as long as his three-meter rod (AFTMA 4-5), he had two light indicators on leader, and below the lower indicator he had a short Camoufil tippet (70cm) with a diameter of 0.16 mm. One could say that he was catching “dry” with a light nymph that he let just a little under the water. When he was fishing in a current, he took off his polarizing glasses, and then when fishing in a stream pool he put them back on. He also didn't forget to check each time to see that the controlor wrote the correct size of fish he had caught.

When the competition had finished, I saw his fly. On his hook a Skalka Wet – 1 size 14, he had a Pheasant Tail Nymph, while the body was ribbed with a copper wire, the collar was from material similar to Spectraflash 45 and was located behind a lighter brass bead in a black nickel colour. I also caught a glimpse into his tackle-box, in which I saw only ten or so same or similar nymphs! I didn't see his dry flies but he probably also had only 1-2 kinds prepared in a light olive (?) colour, which floated very well. The French fished in a similar way in the evening competition below Vyšší Brod; only the leader was somewhat longer, but here they head two indicator sections.

Since I've had the chance to see all five European and world events that have been going on all around the Czech territory for 15 years, I might permit myself a small comparison here. At the World Championships in 1996, the Czechs also won, and Jan Pecina came in third in the individual category. It should be noted, however, that at that time, the competitions were held only on rivers and no one wanted to approve a single still water; Květoňov, then, was only the site of a friendly three-way match between the Czech Republic, Belgium, and England. At the time, there were serious concerns that we wouldn't win without the help of the rivers.

This year it went completely without fears, with two still waters and three rivers. But there was still another difference: in 1996 there plenty of eager spectators, in sharp contrast with the low visitor attendance of this year. And here it is – we have had so many victories that the original interest has faded, and few domestic competitors have come to watch. This truly is a pity. Perhaps it will be better in five years at the World Championships that we hope to participate in, in 2016.