I hope you all know that the 17th European Championship in fly fishing was held in Rožmberk nad Vltavou in June of this year. In the previous years, every nation could sign up two teams for the European Championship. This year was no different except with the small change that the second team had to be ladies. The Czech Republic was the only one to take advantage of this option, thus allowing the participation of our five women in such a big competition. In the relatively long history of international fly fishing competitions, this was the first time that a Czech ladies team competed.

When I was appointed coach of the team, I was given a free hand in selecting five of about 15 active fishing ladies to our national B team. Our first joint meeting took place as part of a small practice weekend three weeks before the Championships at the bank still water competition at the Květoňov Reservoir. The evening after the event we transferred to Rožmberk nad Vltavou, and the next day we practiced at the Vltava 29 – the Devil's Rapids, and at the Vltava 28 below Vyšší Brod. At this training session the ladies tried their hand at what lie ahead. We also discussed tactics, fly patterns and the tackle that they should bring for the championship. 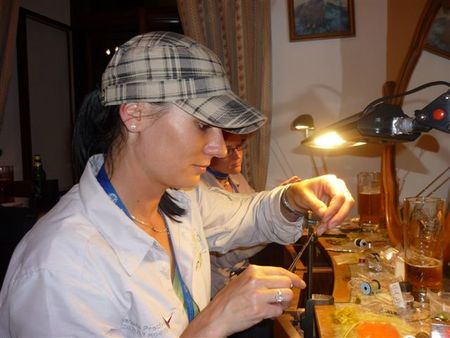 At the competition itself, we arrived a week before the start and the ladies practiced at the training venues, devoted themselves to preparation, fly tying, leader preparation, and the tactics by which they should catch what kind of fish at each sector. I must commend the team here for the first time, as the women approached their training and preparation very seriously and with outright enthusiasm. On Saturday, four days before the start, we were joined by Mirek Málek, who worked as the tier and assistant for the ladies' team.

On Tuesday 31 May 2011, the European Championship was officially launched with a parade through the small town of Vyšší Brod, a welcome, and ceremonial speeches in the Monastery Garden, and then the start was concluded by a banquet in Rožmberk. Wednesday and Thursday were designated for formal training, and on Friday morning, the competition took off.

Our tactic was that we would catch with only two flies at the Devil's Rapids, using the Red Tag or Orange Tag basic pattern with a gold or silver tungsten bead with a diameter of 2.8 and and a dropper of a natural pattern with a different colour bead than the top fly. We were fishing against the stream so as not to frighten the brownies. At the Lipno II equalization reservoir, where the fishing was from a boat, we chose a fast intermediale line and three flies. The top fly was a Hare's Lura with a chartreuse tag, the middle dropper was a Bibio, and a yellow-green Lura was on the top dropper. The retrieving method was mainly Roly-poly and then to stop the flies before the boat and slowly hang them above the surface.

For both venues on the great river Vltava 28 we had the same strategy – to find a spot with the highest occurrence of rainbow trout. Then we would fish here with a Di-3 sinking line with two streamers (black with a chartreuse tip and Orange Sculpin, or Orange Blob). These beats were also to be fished with nymphs with French leader for both the main current as well as the areas around the bank, where the brown trout hide, as do the dace and chub. If the fish began rising then it was time for the dry fly, and two sedges were used for fishing. The girls fished with the same flies on the Květoňov as well as the Lipno II, and when the fish became inactive then the Booby Nymph with Di-5 sinking line was used. 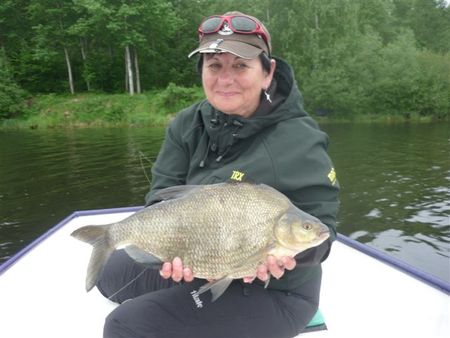 I won't burden you here with detailed reports on individual competitions, on who caught what and where, what luck the ladies had with the draw, or on the fordability of the rivers. Information on the interim and final results can be read on the official score sheets on the European Championship website. From a historical perspective, however, I will remind you that whenever a women's team (England, Sweden) was included in the fishing, they always finished last. There were many foreign competitors, as well as those who weren't aware of the quality of our girls, who probably thought that our team would also face a similar scenario. After the third period, however, when our team was at tenth place, the other competitors began to take them as equal opponents. It's a pity that our women didn't maintain this nice tenth place and eventually finished twelfth. All the same, they were all fishing with great enthusiasm up to the last minute and eventually defeated five men's teams. Individually I would like to praise the impeccable performance of Tereza Rutová, who occupied the fantastic 18th place out of 88 competitors.

I would like, then, to thank our women for their responsible approach, exemplary training, competitive enthusiasm during fishing, and their dedication throughout the European Championship. I would also like to thank the Czech Fishing Union for enabling the participation of the women's team in the European Championship. Big thanks also go to our sponsors, the companies HANÁK, Monfish and Hends PRODUCTS. I also would like to thank Mirek Málek for his dedication in fly tying before and during the championship and the boys from the Czech A team who passed their experience on to us in training. And finally, I want to thank everyone who kept their fingers crossed for us.