Silver and bronze below the Dolomites 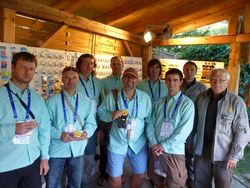 From August 27th to September 2nd, the 31st World Fly Fishing Championship was held in the Bolzano area of northern Italy with 22 countries participating. This championship was held as part of the World Fishing Games, with Italy hosting anglers competing in all possible fishing disciplines in various places. The Czech fishing team, consisting of Antonín Pešek, Tomáš Adam, Pavel Chyba, Luboš Roza, captain Tomáš Starýchfojtů, manager Martin Musil, and me, all set off for the practice several days ahead of time, on Friday August 19th. Our camp was located in the little town of Gais in a B&B on the banks of the Aurino River. Our guide was Sandro Soldarini, an outstanding long-time fly fishing representative for Italy.

The championship organizers decided to hold the event on three rivers and one lake, while two venues were placed on big rivers, the Isarco and Aurino, and two venues were marked on the small torrent Rienza. The last venue was placed at the crystal clear glacier lake Lago di Braies, located at an altitude of about 1200 meters above sea level. During practice, we tried out all types of the contest waters, including the Lago di Misurina which was shallower than the competition's Lago di Braies, but was very similar regarding to catching methods, so the training was very beneficial.

As far as the big rivers went, the Aurino and Isarco, this was relatively tricky fishing in deep milky waters fed by melting glaciers from the peaks of the Alps, and it was hard to find fish here. It was not uncommon to return from practice with one or two catches for half a day's fishing; but if you could find a good spot, you could even catch over 10 fish. There were very decent graylings here, brown trout, the occasional rainbow trout, and marble trout as well. This trout grows to truly great proportions here (during the competition, the Aurino produced a fish 89.5 cm long).

For both big rivers, heavy nymphs on a French leader worked well for us. Darker nymphs with silver, gold, and orange tungsten beans with a diameter of 3.5-4 mm tied to jig hooks from Hanák Competition in sizes 12-14 proved reliable. We always fished with two nymphs, as had been approved by the championship rules. Given the size of the fish, we usually chose a fluorocarbon tippet sized 0.14 to 0.16 mm. We also tried black streamers with orange, green, and purple heads, but without much result. It was practically impossible to use a dry fly, because surface activity of the fish here was fairly exceptional.

Fishing in the small rivers similar to the Rienza competition river was like classical fishing with a French leader. Flies worked basically the same like on large rivers; we just reduced the weight and used a smaller hook. The best flies proved to be bead size 3 mm tied to a hook size 14-16, while we used FC leaders with a diameter of 0.12 mm. The stock here was mostly natural brownie, while we caught several smaller rainbows, graylings, and marble trout. As far as the lake went, small dark streamers with smaller metallic beads on a line with No. 4 sinking rate worked the best. The takes usually came after sinking the set on the first retrieves.

The competition from my perspective

I started the first period on the large Aurino River. In the morning, our bus left just after 5:30 on a trip lasting 25 minutes, but I got to the venue at about five minutes to eight... the situation was tense. The controller did give me a few minutes to prepare, but even so, it was tight. Luckily, our captain Tomáš was there to calm me down, as was Sandro and his girlfriend Franca. I had a good feeling about the spot at first sight, beginning with a nymph in practically the best pool on my shore. I started out well, catching several decent graylings on a fine rod quite soon, although one fell off the line. Then there was a pause, followed by a few smaller graylings and a marble trout on a nymph over 40 cm long. Time was running out, and 10 minutes from the end Tom convinced me to use a streamer, which hadn't worked so well during practice, but Tom's hunch was right, and 5 minutes before the end I caught a brownie on a Black Leech. I finished with a total of 14 fish, placing at number 6.

I went through the second period on the upper part of the small Rienza. When I got to the spot, the controller showed me that the location was nothing special, and that earlier only two fish had been caught here. The river was almost completely covered over by branches, and two pools where some fish might be swimming were practically impossible to get to. I ended up pulling out three brownies, while a third shook free when I didn't manage to pull the rod tip out in time of the overgrowth above a pit. I finally finished the small Rienza at a weak number 12.

I was pleased to learn, however, that our team had generally done well, and we were at the head of the competition at the end of the first day. Moreover, Luboš managed to get the best placement in the Rienza in both rounds, so he led the individuals. Antonín had also placed among the first ten, giving a very good show at the large rivers, as well as Pavel who had battled successfully at the lake and the tricky Isarco. Tomáš succeeded a perfect placing two at Lago di Braies among a strong lake fishing competitors. The Italian team was doing very badly, at 15th place after the first period and at 8th after the second, and their local fans had already written them off.

On Wednesday, the third period only took place in the morning while the afternoon was free. For this period I set off again for the small Rienza, this time at the lower part. I got to the spot with time to spare. The generally monotonous shallow section with a fast stream and a single solid fishing spot didn't promise for an eventful session. Nonetheless, I managed to catch 6 fish on a nymph from a section about two meters square, while none of them fell, and I finally ended up at 5th place. The other guys also did relatively well in the third period, except Luboš, who suffered at the lake. At the end of the second day of the competition, our team was in the lead. The Slovakians held second place, having done very well in the third period, the Poles were third, and the Italians were already at 5th place.

Thursday was already the last day of the competition, and it was clear that the order would still get mixed up with the expected zeroes, so it was very important to avoid them. I was scheduled for the lake in the morning and the fateful Isarco in the afternoon. Upon arriving to Lago di Braies, there was no surface activity to be seen, so I prepared my rod as I had planned the tactic, with a sinking rate No. 4 line (Sweep Airflo) and smaller streamers. I knew that it wouldn't be easy, so it was important to persuade at least one fish, so that I wouldn't end up with a zero. We went over the tactics and spots with Martin, who had been helping us with the lake throughout the competition. I drew a Slovenian as my boat partner, who let me lead for whole period.

We spent about an hour in spots where others had caught stocked brownies in previous periods, but except for what felt like a single retrieve, nothing happened. I decided, then, to take a risk, and after a short consultation with my partner we both set off for a small tributary below a rock cliff. Because we had both walked around the lake before the competition, we know that there were smaller wild fish in the upper area of the lake. The first drift around the shore, and a casts later, I got a retrieve and I catch a trout 25 cm long. I was very relieved after the first fish, because I knew I wouldn't receive a zero for which I would have been punished with 22 placings. Within a half an hour I had caught another eligible fish and had several short retrieves. I caught another three small trout below the limit, but two recorded fish were enough place me at a fine 3rd place, only behind an Italian with 4 and an Australian with 3 trout. Martin was quick to gather information on how the others had done, and things were looking pretty optimistic for our team. On the way, I received an SMS that we were still in the lead after the 4th period, but the Italians were only 5 points away from us.

I completed the final period of the competition at the second large river, the Isarco. The spot was relatively shallow – there were 4 stones at the opposite bank, behind which were smaller pits. The controller told me the number of fish caught at this spot during the previous periods, which didn't make me too optimistic: 3, 1, 0, and 1, but I still believed that I'd find some fish behind one of the rocks. After an hour and a quarter, though, I still had a zero on my scoring card. I exchanged a size 3 rod for a size 4, and added a bit of weight to the flies. At about the 15th casts to the same spot behind the first stone, constantly changing the nymph leading, I caught a brownie, just above the minimal 22 cm, enough to calm me down. I finally caught one fish the same way behind each stone, and I also caught a decent brownie on a streamer. I went away with 5 fish, and I was surprised to find that I had placed second in the period.

After returning to the hotel, they began counting the preliminary positions, and we were all expecting to keep our leading position. At dinner, our international supervisor Igor Slavík came to tell us that we had finished at second place by three points (183), while the Italian home team placed first with 180, and that I had placed third in the individuals. I really hadn't expected the individual scores to mix it up so much. As far as the team results went, second place is certainly fine, but we all had a feeling that the gold had really been close that time, and that our loss was really quite suspicious... the other teams felt it too... and everyone made this quite clear at the announcements... The Poles finished excellent at third place (209), with a fine fishing team, and the Slovakians finished at 6th place (226) this year, when the final day didn't work out too well for them. The French, our usual rivals, came in at 7th this time (233).

The world champion in the individuals turned out to be the Italian angler Valerio Santi Amantini (19), his team partner Stefano Cominazzini was second (27), and I was at third place (28). All the Czechs made it to the first twenty-five in the individual scoring, which in my opinion is a mark of a very good team. Pavel Chyba finished at 9th place (33), Tomáš Adam at 20st (39), Luboš Roza at 23rd (41), and Tony Pešek came in at 25th place (42).