Between 3rd and 8th October, the 22nd European Fly Fishing Championship was held in the surroundings of the town of Slupsk in the North of Poland. Sixteen teams including three women teams took part. With respect to this year’s World Championship in the USA, traditional teams from Italy, Slovakia and Luxembourg were missing and also the Czech Republic sent only 5 competitors without the coach and a Team Manager for financial reasons. These competitors were Lukáš Jahn, Miloslav Hosenseidl, David Chlumský, Vojtěch Ungr and Miloslav Šenkýř. I was there with my shop, because I was invited by Polish friends and I could watch this championship a little from the background.

The centre of the Championship was the Lupawa (Slupia) river, were four sufficiently long sectors were marked. A speciality of this Championship was the fact that only grayling was regarded as eligible species on the beautiful river, but there were enough brown trout, and rainbow trout and practically all other fish species were eligible (minimal size 15 cm) in the competition which took place on a local lake in the city park, excluding pike, which influenced the final competition results from the Czech point of view.

The competition itself was held between 5th and 7th October, weather was harsh, cold rain and strong wind made the conditions hard, especially on the lake and each competitor changed four beats there. In the first part, the local Polish competitor Piotr Zieleniak was very lucky with the draw, when he drew a place in the left corner of the lake in the second part, where a very strong wind drove a large number of rainbow trout and he caught 15 here and won with 19 fish; second finished David Chlumský with 16 fish and David had one of the four lake beats in the right corner of the dam. Competitors from Spain and Finland dominated on the river. Practically, only nymph was used, because graylings were not rising to the surface at all. Czech competitor Šenkýř suffered from the draw, where in his beat under the weir, there were many trout and even if he caught 34 fish, he caught only 3 graylings and this was enough only for the 14th place. The ranking after the first round was as follows: 1. Poland (13), 2. Finland (16), 3. Czech Republic (26), 4. Spain (35). In this round, M. Hosenseidl caught the longest fish of the competition – grayling 432 mm long. 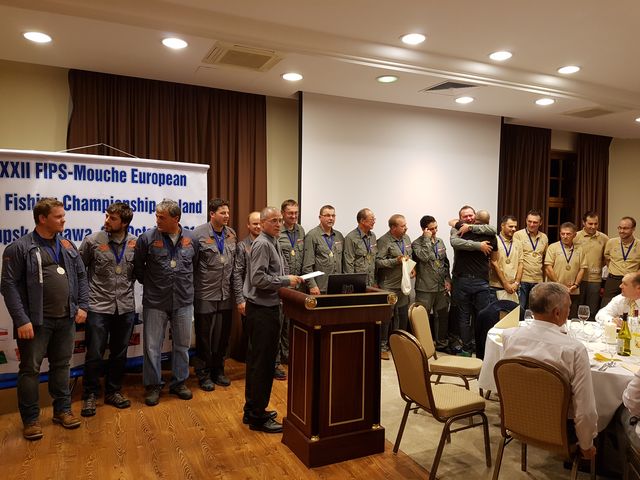 Also in the afternoon round, the weather was the same and the strong wind was breaking branches and trees, which were falling into the river. The Czechs had a good draw and with the number of placings 11, they clearly won the second competition period. On the river, they were usually one place under the local competitors, but Lukáš Jahn won on still water with 9 fish, while the Polish competitor Konieczny was blank and this was a huge loss for his team. After two rounds, the ranking of teams was as follows: 1. Poland (37), Czech Republic (37), 3. Finland (50).

On Thursday, 6th October, the third round was on the program and the competitors had time off in the afternoon. The weather was rainy, only unpleasant north wind started to get weaker. Even this round was won by Czechs with number of placings 18, before the Poles (23) and Spanish (27). On the lake, a young Dutch competitor, Youri Arens, won with 7 fish, Hosenseidl from the Czech Republic was ninth with 2 eligible fish and 2 ineligible pikes which may have sent send him to the second place and the Polish competitor Marchewka had one little rainbow and this was enough for the 15th place. On the river, L. Jahn from the Czech team won in the first sector with 16 fish before the Konieczny from Poland (13 fish); in the second sector, Zieleniak (18) won before D. Chlumský (12); third sector a young English guy Scott Nellins (12 fish) won and the winner of the fourth sector was Pereira from Portugal (14 fish). After three competition rounds, Czechs took the lead (55), 2. Poland (60) and the third were Finns (86). 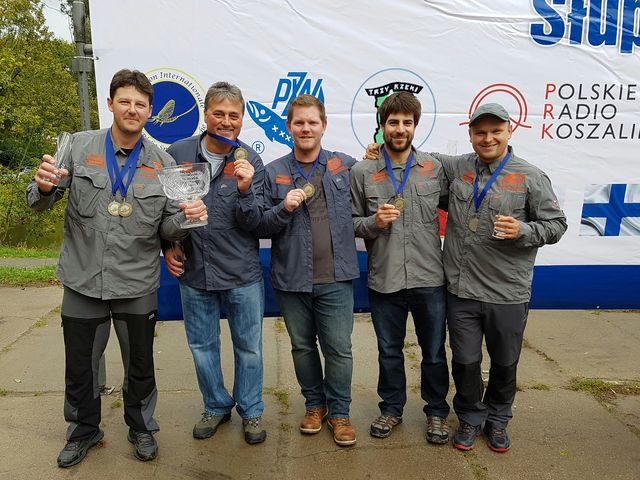 The Polish team did like to see Czech team leading and they did all to change it. Suddenly, our competitors had controllers in high age, who were recording one fish into the scoring card for four minutes and this reflected in the final results. Neither measuring of the fish outside the landing net in the “ gutter” could be discussed and so probably several good catches were not recognized. In the first sector, Marchewka (11 fish) won, second was Hosenseidl (10 fish); Michal Drinan from Ireland (14 fish) won sector two and L. Jahn was the second (12 fish). The third sector was dominated again by Zeleniak (31 fish), second was Ristoleinen from Finland (10 fish) and the fourth sector won Szlachetka (20 pcs) and as the second was Šenkýř (14 pcs). On the lake, the surface got calm and surprisingly Bojan Pesic from Montenegro won, because he managed the best to fish without the fly fishing line along the banks and he caught 10 fish, Armatys from Poland was the fifth (5 fish) and Unger from the Czech Republic on the tenth place (2 pcs). Poles won with the number of placings 13 and gained 9 points against the Czechs who finished second and Poles were leading again by 5 pts.

Domestic competitors completely won the last round, when they reached sum of placings 8, second were Spanish (23) and Czechs were third (28). In the first sector, Armatys won on the river (10), and Unger was the second (9 fish); Rota Marino from Sweden (9 fish) won in the second sector, 2. Hosenseidl (9 fish); Konieczny was the first (18 fish) in the third sector and the second was Jahn (17 fish), P. Zeleniak (15) won in the fourth sector for the fifth time, even if Gusenkovsk from Latvia was only 3cm shorter with 16 fish. 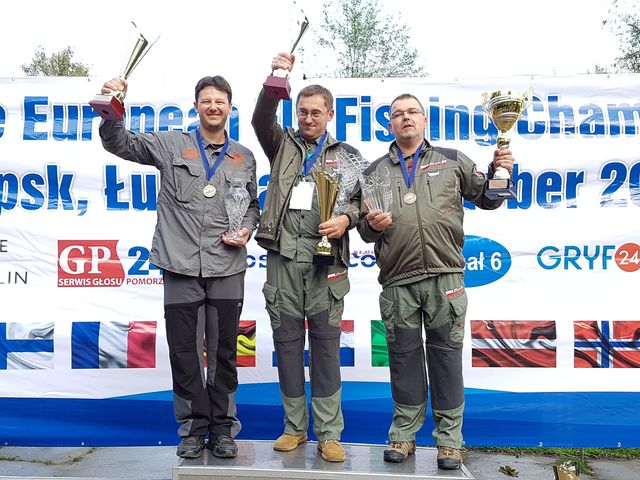 In the last round, Stephan Poirot from France won on the still water with the great performance of 16 fish, second was Nieminen from Finland (5 pcs) and on the third place finished with completely identical results Nellins from England and Szlachetka from Poland (both 3 fish and 2,240 points). Five competitors were completely blank and also M. Šenkýř was one of them. It was seen that the Czechs were without the Captain who could have advised to the less experienced competitor and lead him to the victory. Czechs did not cope with the fishing conditions, which needed only fishing with the leader and practically without the fly fishing line. It was only such “licking” of banks with flies, which is something that I never saw so massively in any competition.

The Poles took the decisive lead and they became the European Champions with the number of placings 81, second were Czechs with the sum 105 and Spanish (142) finished third which moved Finland on the fourth place (155) and the fifth was France (196). On the river, Poles won with the nymph Pheasant Tail with silver tungsten bead and also a small brown Gammarus size 18 and with imitations of tiny manure earthworms. The Czechs had similar patterns of nymphs and they were fishing with the tippet of the diameter 0.09 mm and tungsten beads of the diameter 3 – 3.2 mm on the hook size 18 – 20.

In the individual competition, Piotr Zieleniak from Poland became the European Champion with incredible number of placing 5, second was a young Czech competitor Lukáš Jahn (8) and third finished another local competitor Piotr Armatys (12). It was very well seen that both Poles had known the river very well. The home team as well as Czechs had three competitors among the first ten and Spain, Ireland, Latvia and Belgium had one competitor each among the TOP 10. Most successful women were Aino Hynnä (37th) and Maria Tuominen (39th) from Finnish ladies team. All in all, we can say that this Championship was very well prepared which has become a tradition in Poland.