Gold in the Tatras

The 1999 Flyfishing World Championships took place in Poland on the Dunajec River, in the Tatra Mountains. I was not a total beginner in the Czech Republic Team, because I had received my baptism a year earlier in the U.S.A. on the Snake River, where I won the individual bronze medal. So in the Polish village of Zakopane, I was considered to be one of the favourites.

I was drawn in a very hard group E, where there were 19 of us. My biggest competitors were Artur Raclawski from Poland and Jozef Trnka from Slovakia. Both of them were fishing on what were almost home waters, and they have known the Dunajec River for a long time. We spent one week before the Championships on this river and tried to find out as much as we could about the types of fish and what they would take in the way of flies. The Polish organizers wanted to boost themselves and the River. They stocked the water very heavily with good Rainbow trout and Brown trout, but this heavy stocking surpressed the local populations of wild fish, mainly Grayling. 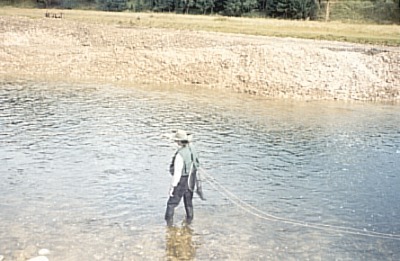 On Thursday afternoon, the event started with the first round, and my 200-meter long stretch was downstream of the village of Tylmanova Brzegi. This draw was very good as a beginning, because this was called the "winning stretch". However, I was third in this sector and everything was very tight. In three hours I caught 43 fish. The next place was on the Black Dunajec River in Novy Targ and was only an average sector. This however really suited me. I combined a streamer with a dry fly and I caught 31 fish, and I won my sector. In the score sheets, after two rounds, I reached second place after Simon Gawesworth from England. 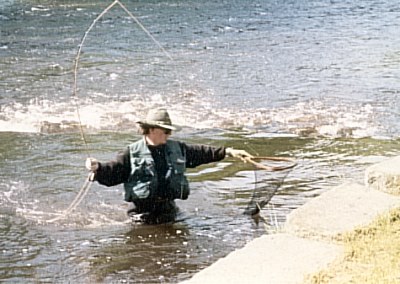 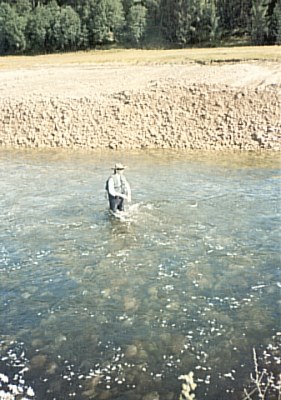 The third period was on the Friday, in the afternoon, downstream of Novy Targ and in sector B. This time my place was under the bridge and it was a very good sector again. Unfortunately, I did not keep my emotions hidden and I got into a verbal conflict with a very strict sector judge. I lost my concentration, so I caught only 27 fish and I was fifth in the sector. Fortunately our team manager solved the problem, and it all finished with my apology to the judge, who is always right. Now after three rounds I was first in the running score sheets.

On the Sunday morning, it was the most difficult competition. Fishing from drifting boats on a very little fished Czorstyn Reservoir, filled with water only two years ago, was ahead of me. Fortunately, we knew where we could catch at least one fish and I managed to do that. Furthermore this fish was the longest of all those caught. There were six of us with one fish and only the English captain Chris Ogborne had two Rainbow trout. So I was in second place. Twelve other competitors from my group were blank, fishing was hard and it was not difficult to blank.

In the last round I had to defend my leadership. However, many fish had been hooked many times and the number of catches started to decrease. The calculations of the trainers said that 20 fish should be enough for a total victory. Our sector was downstream of the town of Kroscienko on the Dunajec River. Josef Trnka won as expected, because he had the best sector of the championship here. However he was behind me from the mornings competition, because his fish from the lake was smaller than mine. Raclawski had a very good beginning, but then he did not fish well, he got nervous and could not manage the psychological pressure of several hundred people who had come to witness his victory. 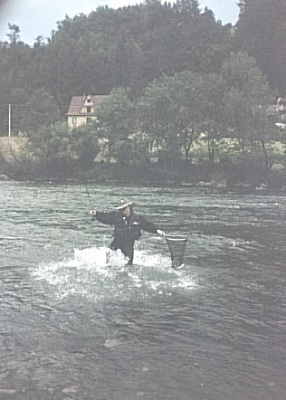 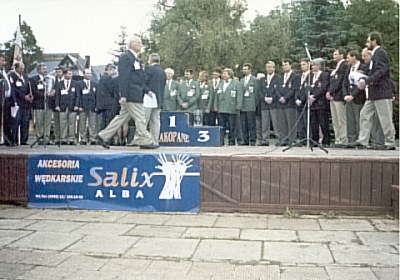 I was fishing about one kilometer downstream of them in a place with difficult access and without the high interest of the public, and this was to my advantage. During the first hour I caught 8 fish with a streamer and this was very promising. The second hour of fishing was spent using a dry fly with an Olive Dun and only three fish were caught. So I came back to the streamers again. The river in this place was about a hundred meters wide and the fish could be caught on the far bank. So with every catch I had to wade through a strong and deep stream, I slipped twice, but always managed to bring the fish in the net to the judge, who measured it and released it back into the river.

Five minutes before the end I handed the judge the eighteenth trout. This brought me the individual Gold medal in the Championships. If I had caught only one fish less, I would have finished with the bronze medal! Results were that close. Second behind me was taken by Ferrari from Italy and the third was Jozef Trnka. Fourth place, was taken by another member of the Czech Team, our veteran Milan Janus from Strakonice. Finishing in fifth place was the original hot favourite , namely Raclawski from Poland. The Polish team did not win Championship because our team Czech Republic stole the Gold Medal from them. Personally this meant the second Gold medal from this Championship for me and I will therefore always remember this Championship.