Bosnia 2015 – too many question marks

Senior World Championship in Bosnia and Herzegovina has been over for two months, but I would add a few remarks to this event. Just at the beginning, I have to say that this was historically the worst Czech result at the World Championship with prevailing river venues. Once we had to be unlucky after a series of ten great results in a line.

Therefore I asked dipl. Ing Pavel Chyba to process the outline of the entire Championship (Table No. 1) in detail and make a theoretical assessment of individual beats based on results of competitors. Martin Musil has already described this event from the point of view of the Team Manager, but it seems to me that it will be necessary to speak a bit more about the public secret and that work of some controllers did not meet the rules. Results of some competitors were too surprising and did not correspond to what was expected from the particular beat.

The very same team which won the World Champion trophy last year both in teams and individuals (Luboš Roza) was nominated for this year´s senior World Fly Fishing Championship in Bosnia and Herzegovina. The team was very experienced including the young predators - Luboš Roza, Pavel Chyba, David Chlumský, Antonin Pešek and Tomáš Cieslar. The Team Coach was Tomáš Starýchfojtů and I was the Team Manager. With respect to very successful previous years, when the Czech team was dominant at the home World Championship in Frymburk and last year completed the hattrick, therefore also this year´s expectations were high.

In the middle of April 2015, FIPS-Mouche General Assembly was held in Cancun, Mexico and we expected its results impatiently. It took a long time before we received the minutes, but now we have got them at disposal and all seems to be clear. We can assume why also the ex-president J. Kowalski was present in the Board (he submitted a proposal to update the draw program), however, the trip to Mexico he probably did not pay from his own pocket. There were three applicants for a vacant position of the General Secretary and an expected winner was Paul Bourqe from the US. His presence in the Board must be welcomed, because his minutes are of a high quality compared to nothing-to-say minutes from the past. Hopefully, he will be brave enough and will find courage to publish also a “secret” financial report, which is traditionally mentioned in the only line.

What is the General Assembly in Mexico about?

Within the meeting of the General Assembly of CIPS in Cancún, Mexico, the General Assembly of FIPS-Mouche was called for Friday 17 April at 3:00 p.m. The delegates of this meeting will be accommodated in the luxurious El Cid Resort on the Riviera Mayo just on the sea coast. For the meeting of the fly fishing federation, a standard program, which is known for many previous General Assemblies, has been prepared. On the program there will be a discussion about the change of German Federation, when DSAV applied for the representation in FIPS-Mou, because the previous guarantor - DAV stopped its support of fly fishing. There should be no problem, as well as in the case of occupation of the position of the Secretary General, in the situation when the current Secretary General, Ilkka Pirrinen, resigned. The American federation proposes Paul Bourcq and it seems to me that he is a very suitable candidate and we hope that he will stay in this position for longer time than by the next election.

Lire la suite : What is the General Assembly in Mexico about?

2014 Youth World Fly Fishing Championship from my point of view

We set out to this year´s Youth World Championship in Poland a week before as usually to be able to tune up all needed during trainings in local rivers - Ciarny Dunajec, Bialy Dunajec, Bialka and Dunajec “Catch and Release“ section just under the reservoir. Compared to the last year, in the Czech team there was only one change in one member. A newbie was only Vojta Vondruška and other team members were Eliška Marková, Lukáš Starýchfojtů, Filip Svašek, Libor Marienka and Martin Vlk, who took part in the World Fly Fishing Championship last year. The team coach was Martin Grün and team manager Jiří Pejchar.

Between 12–18 August already the 20th European Fly Fishing Championship in Central Sweden in the surrounding of Östersund took place. Sixty-seven competitors from 12 countries took part in it. This year´s participation was not too strong, because Norway and Sweden had not only men teams, but also women teams and from Romania only two individuals took part. From traditional teams, this time competitors from France, Belgium, Slovakia and Wales were missing. 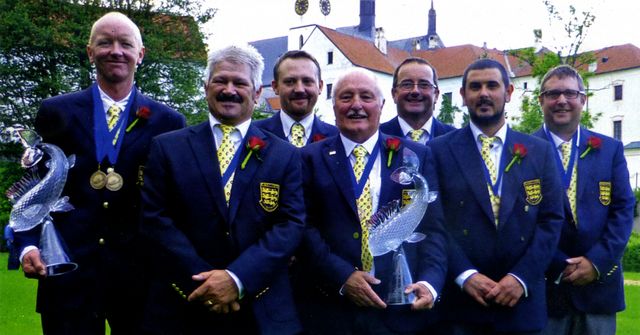 THE 34th FIPS-Mouche World Fly Fishing Championships were held in Frymburk, Czech Republic, with three river sessions and two lake sessions — one from the boat and the other from the bank.

The England Team consisted of Howard Croston, Phil Dixon, Andrew Scott, John Tyzack and myself, with reserve Mike Dixon and manager Paul Page. Paul also booked us a top local guide in Vit Misar, whose knowledge of the area was astounding.

We were to practice for eight full days, staying right next to the Vlatava River in the village of Rozmberk. This was official practice water.