Geoff died on the 16 of February 2005, in the age of 71 years. He was a very well respeted gentleman and was responsible for much of the success of England on the World Stage when he was Manager. His almost unending enthusiasm for the sport and encouragement of anglers to give of their best was responsible for many of the sucesses of England. He was awarded the English honour of MBE (member of the British Empire) presented by Her Majesty the Queen Elizabeth. Geoff was a very succesful business man as well as a a very keen angler. He was a major organiser for the World Championships hosted by England in 1987 and 2000. His death will leave a very big hole in the lives of many English anglers who gave him great respect. He leaves his Wife Ilsa and a son Michael.

Czechs are the third

After last year's World Championship the Czech fly fishermen have moved in long-term tables of medal awards on the third place and only one point is a distance from the second Italians, which is a value of one bronze medal. The Czechs have overtaken England and Poland. Assessment is done in the following way. 3 points are given for a gold medal, 2 points for silver and 1 point for a bronze medal. From the first six teams only teams of France, Italy, England and Belgium have participated in all 24 championships, Poland participated in 21 championships, the Czech team has participated in 19 championships only, and this year they might move even on to the second place.

Invitation to the 27th CIPS congress of the international federations FIPS

Victory for the Czech flyfishermen at the european championship in Lapland 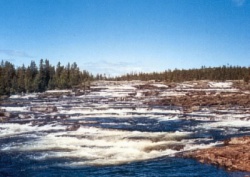 Xth European Championship in flyfishing, which took place in the first week of July in the area of Saxnas in Lapland (Sweden), finished with great success for the Czech Colours. 16 five-member teams Participated in the competition, out of these two Czech and Finnish ones, and the Swedes and the English had women teams. Altogether there were 12 countries and 80 individuals. The Competition is getting bigger and bigger each year. The Polish, French and Italians arrived with their A-teams, other top quality teams sent their substitutes and only the Spanish were missing from the top flyfishing countries.

Lire la suite : Victory for the Czech flyfishermen at the european championship in Lapland

At the end of August and the start of September the Slovak Fishing Union organised the 24th World Fly Fishing Championships. The organisers attracted a record number of 23 teams , involving the unpresidented number of 240 participants. It was held in the beautiful Tatras area. All were accommodated in the mountain Hotel Permon in Podbanska. The centre of the Championships was however Liptovsky Mikulas, where the opening and closing ceremonies were held.

Gold in the Tatras 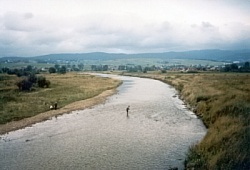 The 1999 Flyfishing World Championships took place in Poland on the Dunajec River, in the Tatra Mountains. I was not a total beginner in the Czech Republic Team, because I had received my baptism a year earlier in the U.S.A. on the Snake River, where I won the individual bronze medal. So in the Polish village of Zakopane, I was considered to be one of the favourites.

I was drawn in a very hard group E, where there were 19 of us. My biggest competitors were Artur Raclawski from Poland and Jozef Trnka from Slovakia. Both of them were fishing on what were almost home waters, and they have known the Dunajec River for a long time. We spent one week before the Championships on this river and tried to find out as much as we could about the types of fish and what they would take in the way of flies. The Polish organizers wanted to boost themselves and the River. They stocked the water very heavily with good Rainbow trout and Brown trout, but this heavy stocking surpressed the local populations of wild fish, mainly Grayling.

As the biggest mistake I would see that the organizers were allowed to shorten stretches for 120 metres, and somewhere even less. The big river was probably 200 metres wide, but the active stretches were in a very narrow line along the banks and mostly it was not possible to wade far, and even the stretches on small river were short. In this case rotation should have taken place after a half of period, because in other the competition lost its sense. At my first sight of both lakes, where the competition took place, was clear that these lakes were not chosen well. Number of rising fish was very low, or there was almost no rising fish, which sharply contrasted with the lakes selected for practice, there were fish enough. Such competition, where one catches only few fish, does not make any sense. The Presidential Board should realize it during the inspections before championships, and the old mistakes should not be repeated while approving the venues. On the other hand there was only one organizational mistake at the opening ceremony there was missing the French team at the front of parade, as the Rules order for the last champions. Possibility of cheaper accommodation was very positive. The guides were not on the required level.

Between 11-18 June Spain organized XXIII. World Flyfishing Championship. The centre of the championship was a little town of Jaca with almost 10,000 inhabitants, located in the region of Huesca at the foot of the Pyrenees. The five-rounded event was divided between four rivers (Aragon, Aragon Subordan, Gallego and Veral) and on the reservoir of Escarra. Majority of teams arrived one week prior to the championship and tried to find the right tactics and flies for the event.

It was not easy at all, because the stretch on the Gallego river was situated quite high above the competitive one and did not correspond with the competitive one at all. Moreover, this was very short and soon there was nothing to fish for. Also the practice glacier lake in Baňos de Panticos was totally different from the mountain reservoir of Escarra, and moreover, there were many newly stocked brown trout, while in the Escarra reservoir there were only wild brown trout.

How i won the world V

Part 5: LAKE OF MENTEITH. "THE MOST IMPORTANT 3-HOURS FISHING OF MY WHOLE LIFE"

THIS is the session I'm looking forward to most. I've never cast a fly into Menteith before so this is going to be a tough test.

On a high from my previous session and knowing Davie Parker took first place the session before me on this venue, I'm quietly confident I'll catch. England had mixed fortunes on this water, Howard Croston fished magnificently to match Davie Parker's position with a first place in the first session of the competition but others didn't fare so well.

Lire la suite : How i won the world V

How i won the world IV

Part 4: "I JUST HAD TO AVOID THE BLANK" World Champion lain Barr needed just oné smáli brownie from Loch Awe...when the pressure was on.

THE fourth session took me to arguably the hardest of the five venues. Loch Awe is some 25 miles long and is a very daunting but extremely beautiful place to fish. We had just one weekenďs practise where I caught only five fish in two days' fishing. However, this practise wastopayhuge dividends during my world championship session.

Lire la suite : How i won the world IV